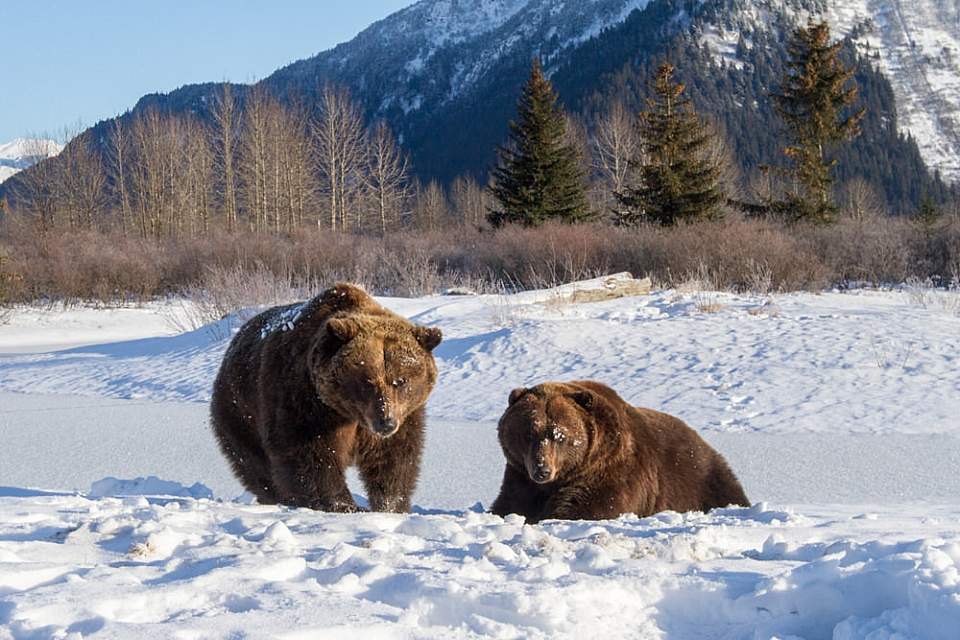 Someone caught a big brown bear on camera up the road from us. That might partly explain the lack of black bear trouble on our patio this fall - I'm thankful not to have my freezer ripped apart again. Juneau rarely has brown bears and it was wandering in the snow in a neighborhood a couple weeks ago. It's all odd and makes me a little more aware when I go for walks.

Years ago, I lived over in Angoon where it was rumored that brown bears outnumbered people 6-1 on the island. There's a joke about how to tell the difference between a black bear and a brown bear. You just climb a tree and if the bear follows you, then it is a black bear. If the bear rips the tree out of the ground, then it is brown.

I took up jogging while in Angoon for approximately a week before I realized what a horrible idea it was in bear country and it's been against my religion since. A friend and I were jogging when a couple of bushes moved. It quickly became clear that they weren't bushes, but sizeable yearlings. The dogs from the village all jogged with us and naturally ran up to the bears to bark and then ran back to us when the bears were sufficiently irritated.

We were out the road and the bears ambled after us until we made our way into the only building, which was an abandoned camper. They weren't angry, just curious. Brown bear heads are huge and kind of adorable when peeking in the windows to see what you are doing. Say, "What are you doing?" in your best bear voice. Yep, that's what I was doing.

They were so stinking cute that I wanted to go out and give them hugs. I knew it would be a horrible idea, but it doesn't seem fair for a creature who could rip you apart to be so adorable.

Destructive things should be obviously ugly and terrifying. Except they rarely are.

Lives get torn apart by things that seem so attractive or at least innocuous. We never know, but it is best not to underestimate the power of the world around us and give it the respect it deserves.